Tizona was a legendary sword that belonged to The Cid, commander of the troops of the King of Castilla. Rodrigo Diaz de Vivar known as The Cid was born in Vivar, Burgos, Spain, in the year 1043. He was a noble knight “Castilian”» , strong, loyal, just, brave, warrior and cultivated. This weapon has saved his life and allowed him to win numerous battles.

The poem " El Cantar de Mio Cid " is the oldest book in Spanish literature written in a Romance language around 1200 years. This poem tells the story of the knight Cid and highlights his heroism.

During his life he switched several times of side, delivering his expertise of undefeated general to Muslims and Christians Kings. He became famous throughout Christian Spain recovering Valencia from Muslims.

In 1099, El Cid dies. All Christendom mourned his death. His remains are in the center of the cathedral of the capital of Castilla, Burgos, but his spirit is still with us now.

Videos para aprender español como lengua extranjera: niveaux A1, A2, B1 y B2 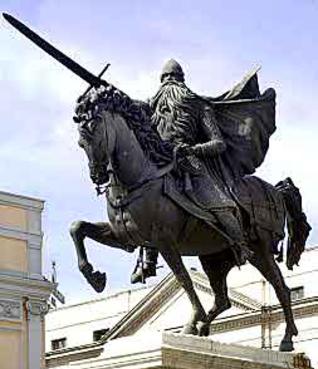